Last week was the best time to see the autumn foliage in Tokyo. This year they changed color slower than usual. The leaves in this season are very beautiful. Autumn leaves are called “Koyo, 紅葉” in Japanese. I like Koyo! Today I introduce spots where recently I went leaf-peeping in Tokyo this year. The spots are bellow. You can jump to each spot.

2  Inui Street in the Imperial Palace

When is autumn leaves in Japan?

The best season of autumn leaves is usually late November in Tokyo and Osaka.

What is the temperature of the autumn leaves season?

※The post I wrote about autumn foliage in 2017 is this↓

Japanese Daily Life
Tokyo autumn foliage in 2017
https://www.japanesedailylife.com/spot/autumn-foliage-in-2017
Autumn has come to Japan! Many leaves turn red and yellow in Japan. Tokyo has many autumn leaves spots.Japanese AutumnAutumn is a comfortable season. Not so hot and not so cold. In Japan, it is said that autumn is the best season for doing various things. For example, the best season for sports, reading, eating, art, and so on.I like autumn foliage. Many leaves will turn red and yellow. They are very beautiful! I go leaf-peeping every year. Sometimes I go to a far place to view autumn leaves.... 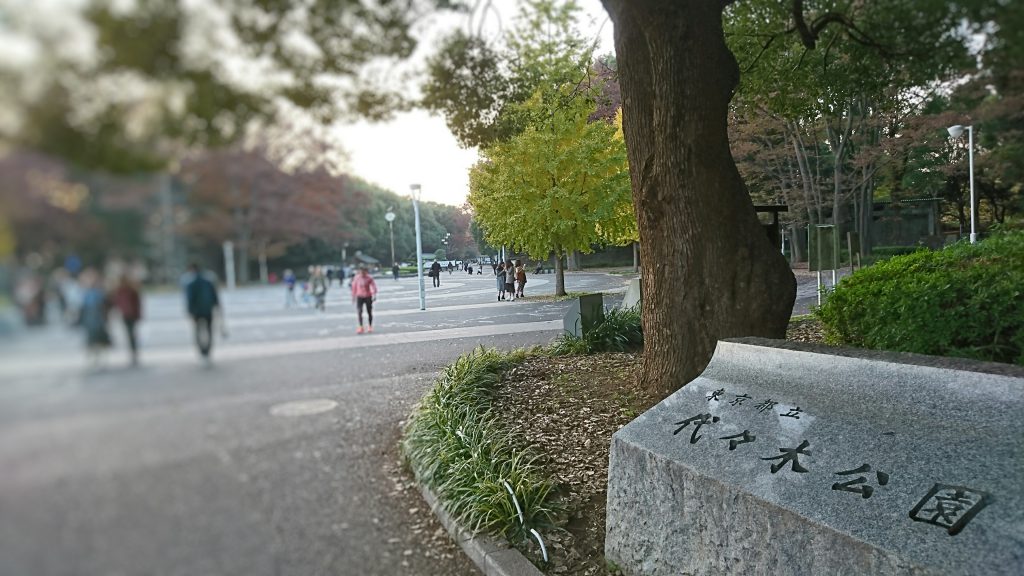 Yoyogi Park is the large municipal park in Harajuku, Tokyo. It is located next to Meiji-Jingu. In the park, many citizens are walking,  jogging, or playing anytime. I visited the park to see autumn leaves late November. 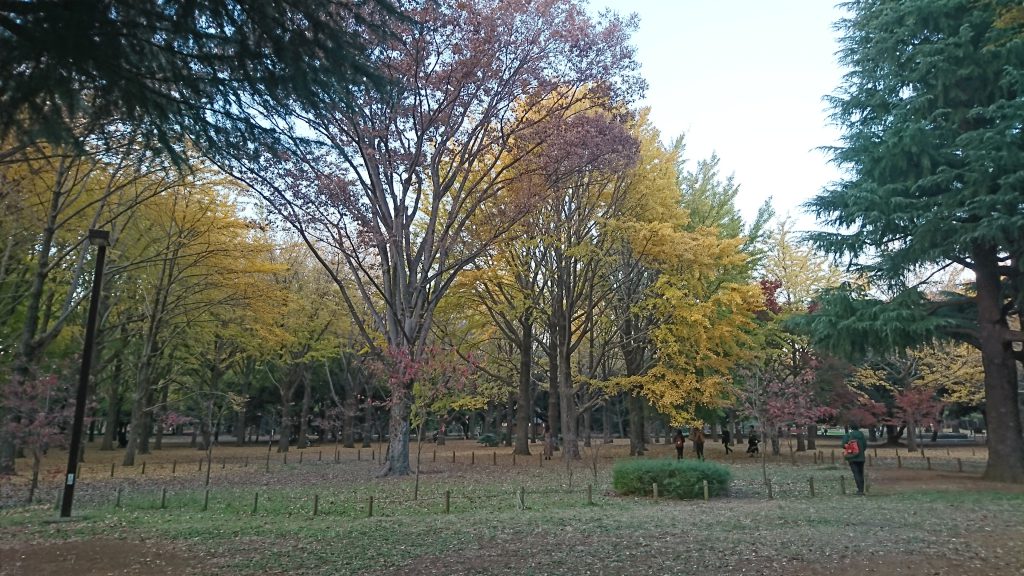 In Yoyogi Park, the leaves of about 1,300 trees, such as zelkova, ginkgo biloba, and maple, change their color in autumn. The yellow leaves were beautiful, but some leaves were still green and didn’t change color. My visit might have been still early for autumn foliage…it was a pity. 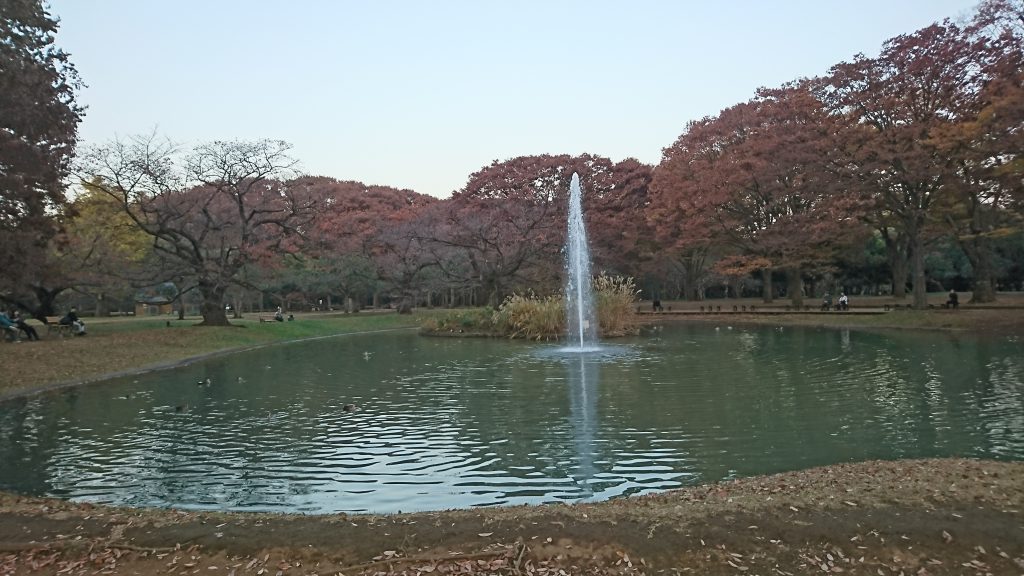 Some leaves around the fountain were red. Many people were watching autumn leaves while sitting in the benches around the pond. 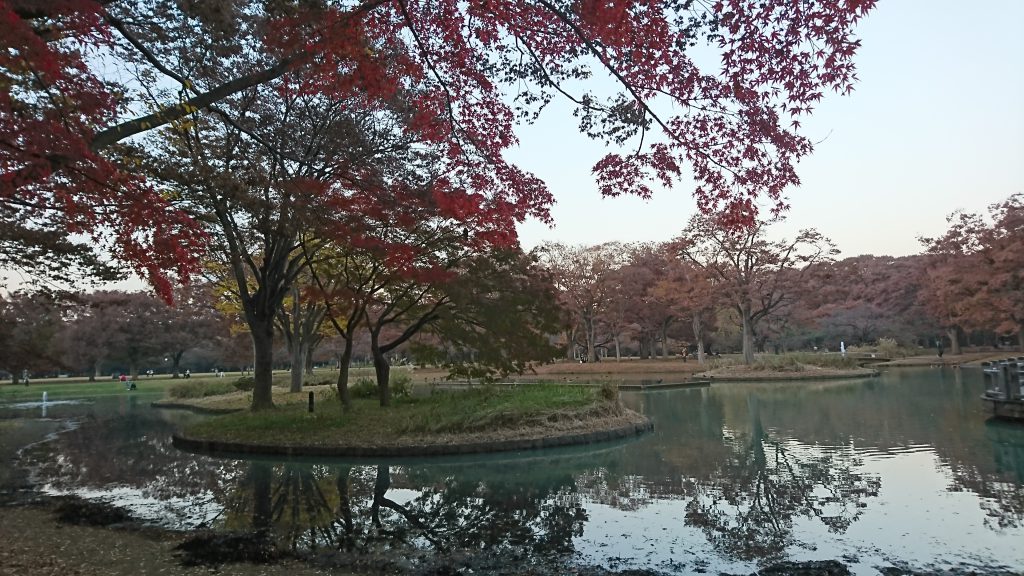 The first week of December seemed to be the best time to see the autumn foliage in the park. This is the tweet of  Yoyogi Park on Dec 10th. “Leaves are almost scattered and golden leaves covered the ground. Irohamomiji also began to fall, the red leaves of only some trees remain.”

2  Inui Street in the Imperial Palace

Because many people visit inside the Imperial Palace, you have to undergo a security check by police before entering the Sakashita-Gate. This photo is the Sakashita Gate.

Passing through the gate, you can see the Kyuden, where the emperor performs rituals.

Many people were walking to see autumn leaves. The building on the left is the Imperial Household Agency.

Inui Street is a straight single road. It was one-way from the Sakashita Gate to the Inui Gate or East Gaden. Red maple trees were on both sides of the road.

You can also see Yamashita Street, but can’t enter in. And you can find a cherry tree which blooms in winter. This tree was rare, so many people were taking the .

The trees I felt the most beautiful were those pictures’. They were in the middle of changing their color. They had green and yellow and red leaves!

This is the scene you can see only when the season is changing.

When you see the Inui Gate, leaf-peeping is finished. I had a wonderful experience of walking inside the Imperial Palace! If you come to Tokyo in the spring or the fall, please try to visit Inui Street. You can get information from the website of the Imperial Household Agency.

Passing the Inui Gate, and then, I went to Kitanomaru Park which is just on the other side of the crosswalk.

Kitanomaru Park is the national park located in the outer garden of the Imperial Palace.  There are many plants, a lawn square, and a large pond in the park. And the park also has remains of Edo Castle and cultural facilities such as Budokan and National museum of modern art.

I visited this park for the first time, the autumn leaves were great!

The gradation looked beautiful. Many people were taking pictures.

You can walk among trees. Many people were enjoying leaf-peeping.

The autumn leaves had carpeted the ground. They ware beautiful.

I found autumn leaves on the stone over the small river. It was a nice scene.

I enjoyed the autumn season again this year. I was satisfied!