How to survive rush hours in Tokyo

In Tokyo, trains are very crowded in the morning and in the evening. That is a rush hour!
I go to the office by train on weekdays and occasionally I see foreign businessmen or travelers who are surprised by this situation and confused. People who don’t live around Tokyo may feel this rush hour is crazy. And they may wonder how do Japanese people survive the rush hour train every day.
Today I talk about things to do during rush hours in Japan trains and tips to travel by crowded trains. It is important information for people planning to travel to Japan!

How crowded are the trains during rush hours in Tokyo?

You cannot move in a packed train during rush hour! According to the survey conducted by the Ministry of Land, Infrastructure, and Transport in 2017, the most crowded line was the Tokyo Metro Tozai Line, and the congestion rate was about 200%. This is the situation in which your body touches the other people’s bodies and you have a feeling of oppression.
Also, the Stations are very crowded, too. This photo is the platform at Shinagawa(品川) station in the morning. 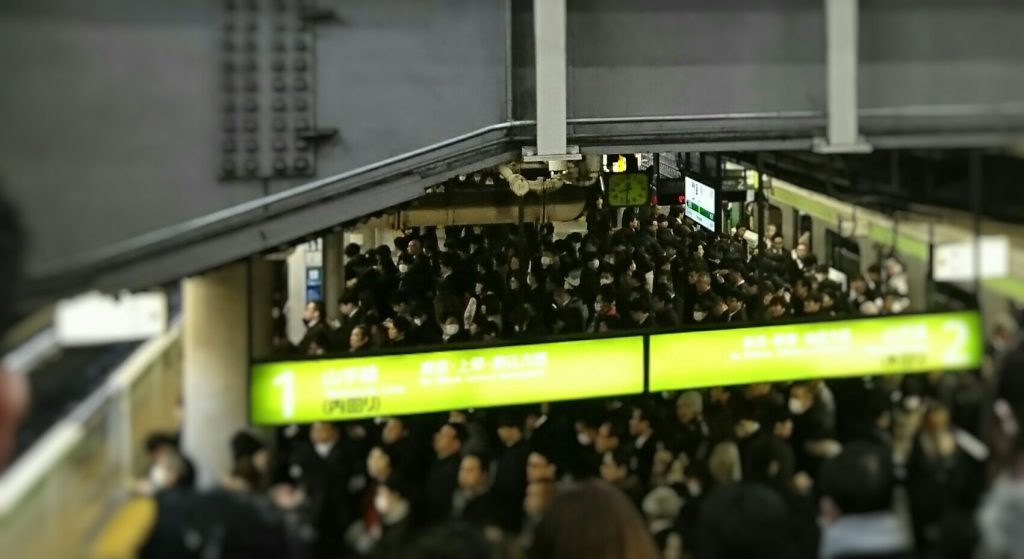 Shinagawa Station is one of the biggest stations in Tokyo. Many people transfer another train at the station. Many commuters are waiting for a train and the platform is very crowded. Sometimes you cannot even enter the platform because of many people waiting for trains, in such a case you have to wait for trains at the stairway to the platform.
Of course, the congestion rate of trains is improving. Trains are less crowded than in the past. But still crowded…Many people working in Tokyo survive the rush hour train every day but feel uncomfortable to take a crowded train every morning and very tired.

Why are rush-hour trains so crowded in Tokyo?

Moving to Tokyo of many people causes rush-hour crowded trains. The daytime population of Tokyo is approximately 16 million. Many people gather in Tokyo for work.
Tokyo has a well-developed transportation network. It’s very convenient. 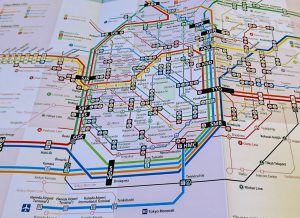 ↑Railway and Subway Route Map of the Metropolitan area

People who live around Tokyo are able to live not using cars thanks to the convenience train network. They use trains every day instead of cars. Many companies are located in the center of Tokyo, and many employees go to their office by train from their home. Work starts between 9 AM and 10 AM in many companies, so stations are full of commuters between 8 AM and 9 AM. That time is the rush hour! Trains are very crowded. 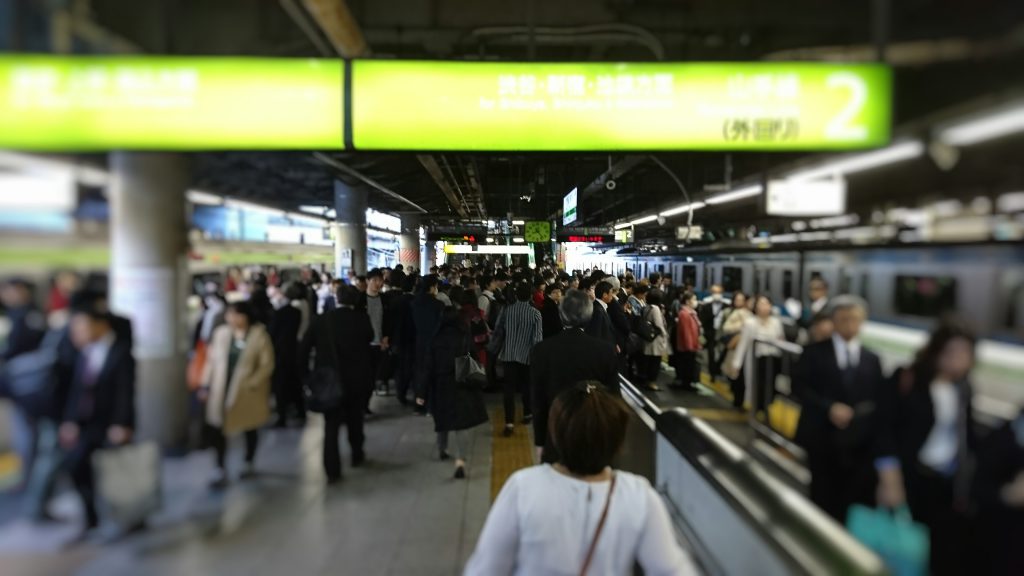 ↑many people during rush hour at Shinagawa Station

What time is a rush hour in Tokyo?

How to survive rush-hour trains in Tokyo

Some people manage to take a less crowded train. I introduce my four ways to avoid the crowded rush-hour train. I sometimes try to do bellow things during rush hour.

Indeed, you can take an emptier train. There are several trains running in the same direction in Tokyo. The things that one train is crowded but other trains in the same direction are not so crowded often occur.
For example, when you go to Tokyo Station from Shinagawa Station, you need to take the Tokaido Line or the Yokosuka Line or the Yamanote Line or the Keihintohoku Line. In my experience, during the rush hour in the morning, the Tokaido Line and the Keihintohoku Line are more crowded than the other two lines. I recommend that you take the Yamanote Line in this case because the Yamanote Line in this section is not so crowded and the platform of the Yokosuka Line is far from the center of Tokyo Station. If you check the railway route map and search for information before going to the destination, you might be able to take a not so crowded train even during rush hour.

③ Wait for trains in an emptier place

Waiting for trains in an emptier place is important. One train has many cars. Depending on the line and the station, the most crowded car changes. Generally, people tend to wait for trains near the stairs and elevators at a platform, and the car stopping near them becomes crowded. And many people are getting on and down the train there, so you take a long time to get on. For example, on the platform of the Yamanote Line bound for Shinjuku at Shinagawa Station, several train cars close to the very last car are especially crowded during rush hour in the morning. You need to wait for the train in the other place of the platform.

④Wait for the next train

Lastly, I introduce how to ride a crowded train in Tokyo. Occasionally I see foreign businessmen or travelers who are surprised at this situation and confused. Unfortunately, some people tend to become irritated by the behavior of other people in the morning rush hour. (^^; This time I talk about the manner I think important.

・Stand in line and wait for a train

You must not cut in line. If you cannot ride a train, you have to wait for the next train.

・Keep your bag in front of you

If you carry a backpack, you have to wear your backpack on your front.

・Lower down your voice

Some Japanese people feel it unpleasant to talk in a loud voice in a crowded train. please be quiet on a packed train.

If you are near the door, you have to get off the train once to make way for people who want to get off it.

If you visit Tokyo and take a train in the morning, you will be surely surprised. You can experience Japanese daily life, haha.
I talked about how to survive the rush hour train. It is important to take a less crowded train by avoiding the time of a rush-hour or changing lines or places you get on or waiting for the next train. In case you get on a crowded train, please remember the tips I introduced. Have a good stay in Tokyo!