What is the difference between Sushi and Sashimi ? 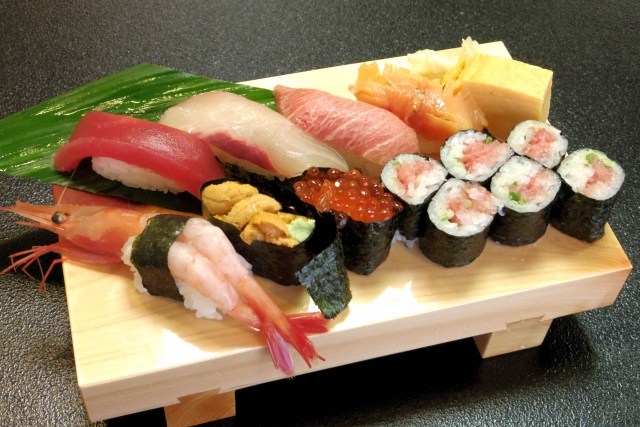 The popular neta in Japan is tuna, salmon, yellowtail, octopus, squid, shrimp, salmon roe, sea urchin, and so on.

By the way, in Japan, if you say sushi, people usually think of nigiri-zushi (hand-formed sushi). Japanese people used to eat sushi as a preserved food since about 1000 years ago. Then, nigiri-zushi was made in the Edo period, it became popular. I heard maki-zushi (rolled sushi) is more popular than nigiri-zushi in the US and Canada, which surprised me. 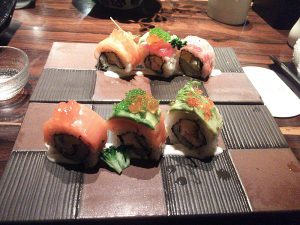 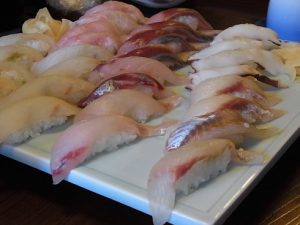 Maki-zushi; A kind of sushi rolled with vinegar rice on the seaweed 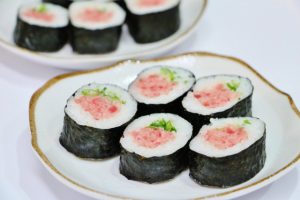 Chirashi-zushi; A kind of sushi which puts various kinds of ingredients on vinegar rice 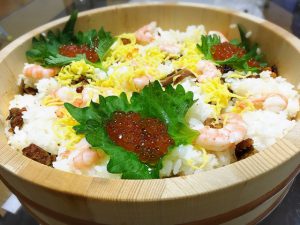 How do you eat Sushi?

Eat by hand or chopsticks. Dip in soy sauce.

Where can you eat Sushi in Japan?

You can buy a pack of sushi in supermarkets or department stores. This contains about 8~10 pieces nigiri-sushi. Its price is about 500～2000 yen. Many stores discount sushi right before the closing time. What’s a good deal! And you can also order Sushi delivery. 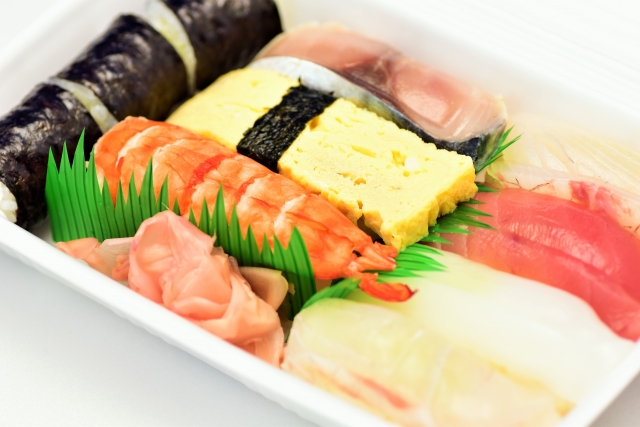 ↑ a pack of sushi

There are many sushi restaurants in Japan. You can eat sushi in conveyor-belt sushi restaurants at a reasonable price. The price is about 100~200 yen by one dish (contains two pieces). Sushiro, Kurazushi, Kappazushi, and Hamazushi are popular national chain restaurants. 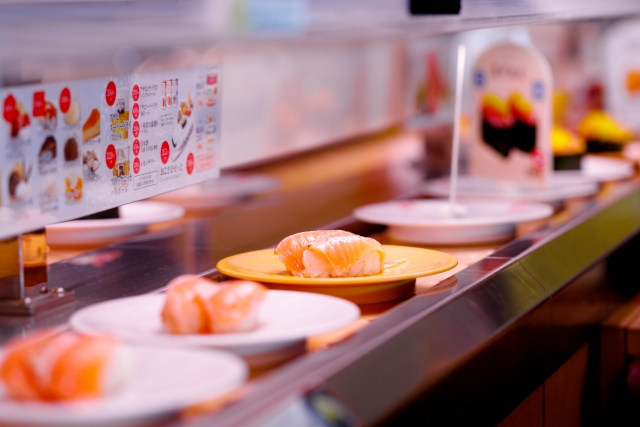 You can also eat sushi in not conveyor-belt sushi restaurants. I like “sushi no Midori” in Tokyo. I have been to this restaurant a few times. You can eat fresh and delicious assorted sushi with about 2000～3000 yen. This restaurant is very popular with foreign tourists, it is usually very crowded. The official website is here ⇒ http://sushinomidori.co.jp/eng/ 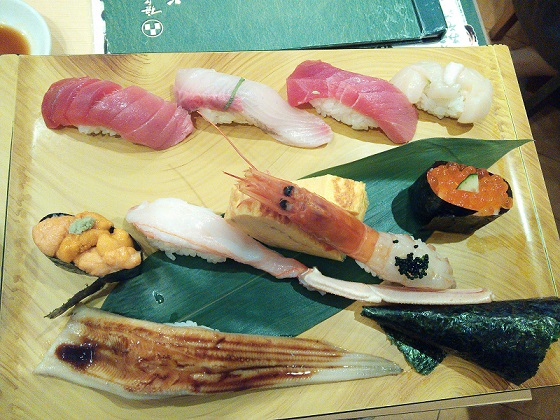 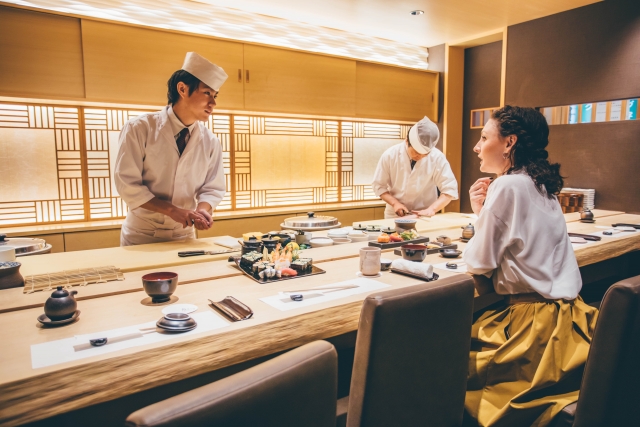 ↑the image of a fancy sushi restaurant

Sashimi is raw seafood cut into small pieces. It is eaten with seasoning such as soy sauce. Without vinegar rice! It is also called “otsukuri” in Japanese.
The popular kinds of sashimi are tuna, salmon, greater amberjack, yellowtail, scallops, flounder, mackerel, squid, bonito. 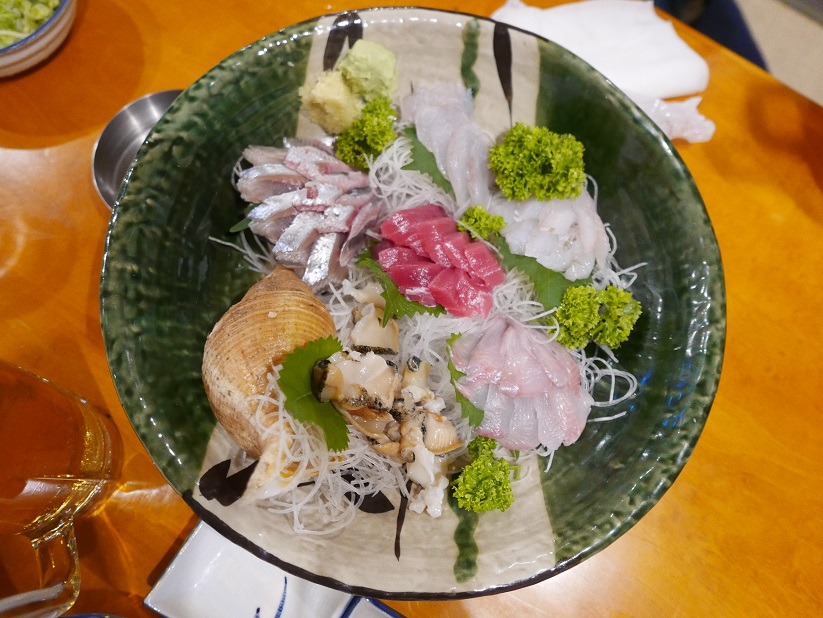 How do you eat sashimi?

Eat with soy sauce and wasabi and use chopsticks. Some people eat with rice, it is so-called “sashimi teishoku”(=it means a set menu).

Where can you eat sashimi in Japan?

You can buy a pack of sashimi in fish stores, supermarkets or department stores. Its price is about 500～2000 yen.

Sashimi served in seafood restaurants located in coastal areas is very fresh and tastes good! If you want to eat sashimi in urban areas, you can eat sashimi in izakaya (Japanese pub) at a reasonable price. Japanese people often order assorted sashimi with sake. Some izakayas serve sashimi teishoku for lunch. 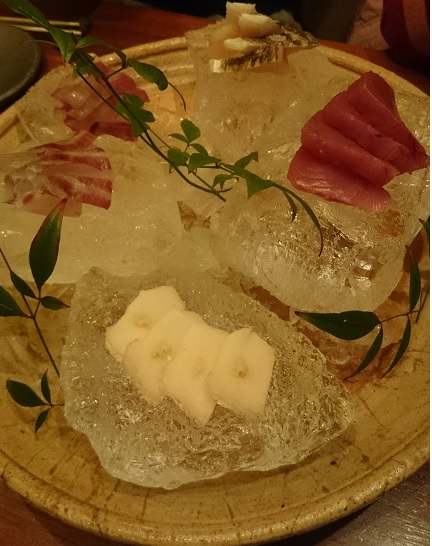 ↑sashimi that I ate in izakaya before

And otsukuri is served in Kaiseki restaurants. Kaiseki cuisine is a traditional Japanese course meal. This dish is not so cheap, so when I stay at a ryokan(Japanese style hotel), I enjoy kaiseki for dinner. The stay in ryokan usually includes dinner and breakfast, you can eat sashimi for kaiseki dinner. 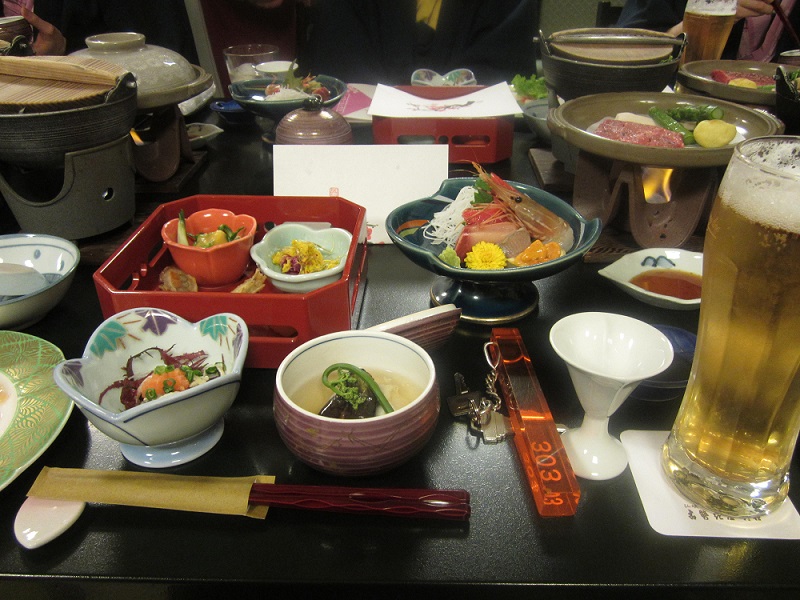 Kaisen-don, which is an assorted seafood rice bowl, is one of the Japanese raw fish dishes. Especially eating kaisen-don in restaurants near fish markets is very good! Very fresh! I eat this every time when I trip to visit a fish market around Japan. 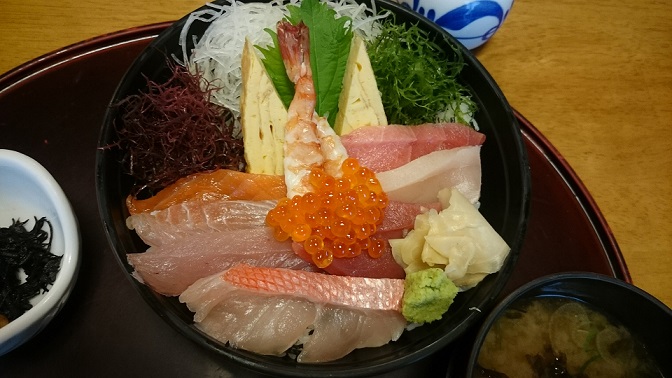 Summary of sushi and sashimi in Japan

Sushi is a slice of raw fish put on vinegar rice. There are nigiri-zushi, maki-zushi, and chirashi-zushi. You eat sushi with soy sauce and wasabi by hand or chopsticks. in Japan, the price for sushi varies depending on restaurants.

Sashimi is a slice of raw fish itself. You eat sashimi with soy sauce and wasabi by chopsticks. In Japan, sashimi is often eaten as a part of a course or a set, such as a side dish, set meal, and kaiseki cuisine.

Thank you for reading!